Sale on canvas prints! Use code ABCXYZ at checkout for a special discount!

Tales From The Darkroom

Previous Next View All 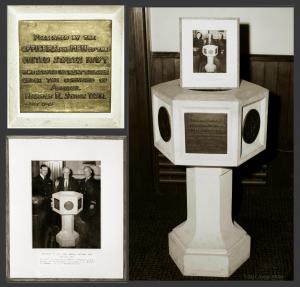 He was just a young kid of twenty, way back in 1966, a recent grad of the US Naval Schools of Photography. He was assigned to Submarine Squadron 14, Holy Loch, Scotland--America's brand new Polaris missile base in Great Britain and far away from his home in the old Anthracite coal mining regions of Pennsylvania. One of many of the kid's important assignments came from the Naval Photographic Center, Washington DC. He was to provide photographs of the birthplace of John Paul Jones (the Father of the American Navy) for display at the Naval Museum, Washington DC. This was a Big Deal for the rookie photographer. The commanding officer assigned him a driver (the chaplain's own personal driver!) and a car. Off they went, on a foggy Scottish morning, the coal miner's kid from Parsons, Just outside of Wilkes Barre PA & his driver to a little cottage near Kirkbean, in the Stewartry of Kirkcudbright, Scotland.

Almost to their destination in Kirkcudbright the young photographer noticed a little stone church. That small voice in his head spoke to him, as it often did, nudging him to stop and poke around. He urged the driver to pull over.The kid had always been a perpetual snoop harkening back to his early childhood explorations of old anthracite coal collieries and mines, with catchy names like Peach Orchard Colliery, Pine Ridge, Mineral Springs, & Laurel Run Creek,& Blue Bottom.
Inside the main area of the church he saw a beautiful granite baptismal font with a plaque embedded on the front and a photograph on top. Something about an Admiral Harold Stark, US Navy. He snapped a photograph.

What our young boy did not know then was that Admiral Harold Raynsford Stark, himself a Wilkes-Barre native was Chief of Naval Operations in Washington at the time of the Japanese attack on Pearl Harbor. He later served as the Commander of the European Naval Forces in 1942, and as a liason between Prime Minister Winston Churchill and President Franklin D. Roosevelt during World War II. After his retirement, Stark served as Chairman of the Board of Trustees of Wilkes College, now Wilkes University.

Later on in the boy's life, he established his own photographic studio (Spectrum Studio) on South River St in Wilkes Barre, PA. One of his accounts was public relations photography for Wilkes University, where he was asked to photograph the Admiral Stark Room at the university's library. As he photographed the Room of the famous Admiral Harold R. Stark he remembered that little stone church in Scotland.

Another of the many accounts of Spectrum Studio was marketing & public relations photography for the then new Geisinger Medical Center, Wilkes-Barre, PA, the kid was asked to photograph the very last major event ever to be held at the now closed Sterling Hotel. The Sterling was one of Wilkes-Barre's oldest and grandest hotels and one of it's ballrooms was named the Admiral Stark Room. That event was the Geisinger Women's Auxilary Grand Ball. In attendance that evening was Congressman Dan Flood (Daper Dan),Dan's wife Catherine & actor Jack Palance and 'anyone' who was 'anybody' in Wyoming Valley. The little church in Scotland dimly flashed through his mind.

Years later, an elderly man gave our boy a box of antique 8x10 negatives. Among them the kid found several original negatives of Admiral Harold Stark's home in Conyngham Valley, PA. Once again he remembered the events of that foggy Scottish day and the small stone church in Kirkcudbright and couldn't help but wonder at the meaning of these recurring events in time.

Circles within circles. It is indeed a very small, strange, world we live in!

Arthur Miller is an Artist/Photographer